Pen + Brush is proud to present the debut of two distinct bodies of work by Michela Martello and Tricia Wright. This exhibition uniquely showcases aspects of humanism, inquiry, and want for understanding that inherently link otherwise contrasting new works.

Michela Martello creates works that are profoundly thoughtful and marginally rebellious. Heavy subjects, like Tibetan Buddhist and Pagan semiotics, are merged with the likes of Shakespeare and David Foster Wallace and communicated through an aesthetic informed by years as an illustrator and inspired by the Italian Masters. Martello’s works are thrillingly original with experimentation, in both technique and physical form, and the willingness to draw connections between that which has historically remained separate. Her process begins with solitude, isolating herself to research and contemplate individual works. In this new body of work, Martello curiously approaches the topic of talismans, from ancient to contemporary mythology, across cultures, and throughout religions.

Whether envisioning a woman and the intimate ornamentation of her body through clothing or a ceramic sculpture or depicting women as containers for mystic narratives and symbolic elements from nature, Martello opens a dialogue with the transitory nature of the body. Where she undresses her subjects, we see their matter becoming a vessel for superstition and the transcendent. In Redhood, a delicately-executed small ceramic sculpture portrays the protagonist of “Little Red Riding Hood” cloaked in an armor of red. The shiny lacquer is interspersed with images of a wolf and scratched in text showing the word “l ate it”. The cloak appears as a sturdy shield imbued with protective powers before the subject embarks on a dangerous journey although the danger in this case is bilateral. In a textile painting that Martello composed on a pre-used U.S. army tent titled Tiger’s Nest, a nod to the sacred Buddhist temple of the Himalayas, two feminine forms lay nude in a field of four-leaf clovers. The green tint of the once occupied army tent fills the outlines of the clover, once a charm used by Celtic priests who believed that the plant carried luck that warded off evil spirits. The subjects in the painting appear serene juxtaposed to the rugged cloth of the tent yet sheltered by the rows of four-leaf clover.

Tricia Wright’s series, Walled Garden, takes its name from the medieval genre of the enclosed garden (hortus conclusus), which denotes a space set apart, specifically a feminine space. Wright uses the space inside a glass bell jar to present incomplete views of women; the photographed flowers inside the bell jar and the painted flowers outside mimic the millefleur device used in medieval tapestries to indicate a symbolic garden.

In one composition the iconic Christian Louboutin Fetish shoe, which positions the wearer in an impossible pose, is shown on an iPad inside a glass bell jar. These objects rest on a circular field of artificial flowers surrounded by stylized flower forms derived from medieval tapestries. Inside another bell jar Wright offers Gustave Courbert’s painting, Jo, La Belle Irlandaise, as a place to consider the complexities of the gaze: A Man Looking at a Woman Looking at Herself. In a process that combines painting with photography Wright weaves a pictorial space that is neither purely one nor the other, and like the unreliable narrator invites questions about the veracity of what is being depicted.

Wright’s more recent series, Pizan’s Garden, is rooted in a literary text by the medieval scholar Christine de Pizan, whose proto-feminist work, The Book of the City of Ladies, was published in 1405. Pizan imagined an allegorical walled city, built, populated, and governed by women and guided by three allegorical female figures: Reason, Rectitude, and Justice. Wright imagines a garden in Pizan’s city, a similarly allegorical space that reflects on agency and self-actualization. Again combining painting with photography, each work in the series cites an Old Master annunciation painting, which Wright has altered, bisecting the original composition and replacing the figure of the Archangel Gabriel with a mirrored image of Mary. This halving and doubling shifts the balance of power from a binary one to one of self-determination. 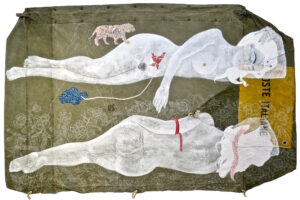 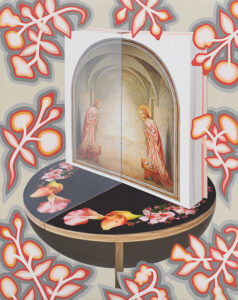 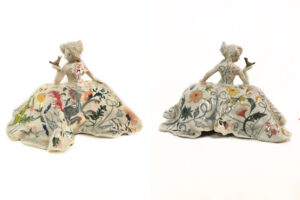 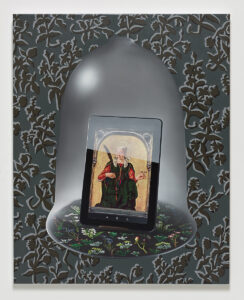 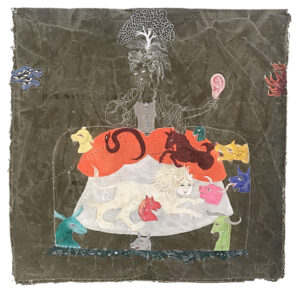 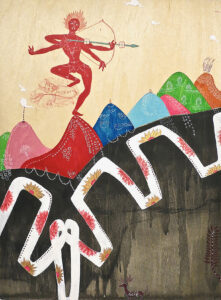 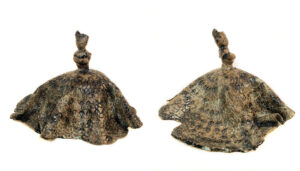 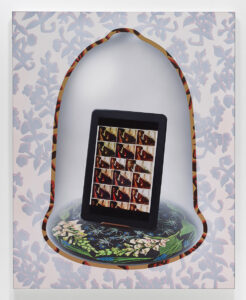 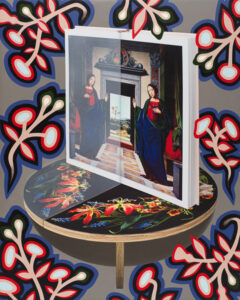 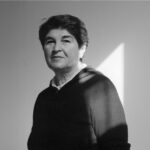 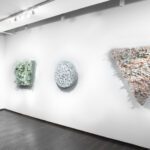 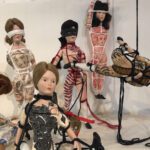